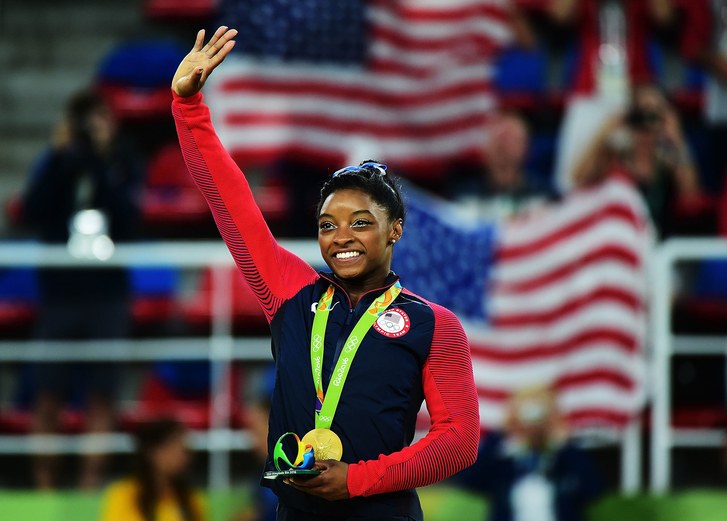 The fifty-fifth edition of the U.S. National Championships, featuring gymnasts from around the U.S., had an amazing turnout this year. The championships were held on August 16-19, 2018 at the TD Garden in Boston, Massachusetts. These gymnasts all competed for a spot on the national team for the 2018 World Championships, which will be held on October 25 through November 3rd in Doha. The top three teams in the World Championships will compete at the 2020 Tokyo Summer Olympics. The top six all-around females in the U.S. National Championships automatically made the national team, but there are only five spots in the World Championships. Simone Biles, Morgan Hurd, Riley McCusker, Grace McCallum, Shiles Jones and Jade Carey were the top six senior women and made the national team. The seventh and eighth place finishers, Kara Eaker and Trinity Thomas, also qualified. The six highest scoring junior women included Leanne Wong, Kayla DiCello, Sunisa Lee, Skye Blakey, Konnor McClain and Olivia Greaves.

Simone Biles took home the gold on all four events including the all-around placements. She is the first woman to win first in every event at the National Championships since Dominique Dawes in 1994. “Being the first to sweep all the titles since Dominique Dawes is inspiring. It’s kind of cool to follow the path,” said Biles. Biles achieved an all around score of 119.850, beating Morgan Hurd by 6.55 points– a greater point difference than the margin between Hurd and the eighth place gymnast Trinity Thomas. Hurd was the 2017 World all-around champion. “I feel honored to compete with such a legend. She’s the best. Clearly, she’s the greatest of all time, but I would hope one of us would come close to catching her. We all just want to be on top of that podium,” she said.

Simone Biles is a five-time Olympic medalist and is widely considered the greatest gymnast of all time. She had left the sport for two years on a break, but returned to competing for the U.S. Classic two months ago. There, she won first for the all-around title. “I feel like I enjoyed championships a lot more than Classics. I felt at Classics, I was still easing back into everything and kind of feeling the surroundings and getting used to competing again,” said Biles. Chellsie Memel, the 2008 Olympic silver medalist and 2005 world all-around championship, said: “she’s just on another level. I mean, she is. She is amazing, especially to come back and be even better and not just better on the events she was already strong on, she’s better on everything, which is insane. And I still feel like she can do more. I still feel like the gymnastics isn’t that hard for her which is crazy because she’s doing amazing things. It’s really impressive and I do appreciate what she’s doing.” Biles’s comeback to the sport caused many to ask her about carrying the pressure of having to save gymnastics in the country.  “It’s both exciting and kind of scary because I don’t want them to be completely dependent on me for the sport to continue. No, it’s not fair to me because I can’t carry the whole gymnastics world on me. But I guess it’s kind of exciting I can bring some happiness back to the sport,” said Biles. She was unsure about how her recent return to competing would play out in the championships. “I kind of thought I’d be a nervous wreck and maybe fall apart. Going into these events, I keep telling my family, ‘I don’t know if I’m going to be able to calm myself down the way I did before and handle the nerves.’ But so far, so good,” she said after her win.

Beyond her victory, Simone Biles made a statement while competing. In January, she spoke out as a survivor of the abuse of previous U.S.A. Gymnastics team doctor Larry Nassar. Biles and other survivors were given the Arthur Ashe Award for Courage at the ESPY Awards. She represented them at the championships by wearing a teal colored leotard which she designed herself to represent survivors of sexual assault. “[The color] is for the survivors. I stand with all of them, and I think it’s kind of special to unite,” Biles said. Both her performance and confidence has truly shone throughout this competition, which says this has come from age: “I know it’s kind of stupid, but I think I’m older, wiser, and I’m finally starting to get it. I’ve understood gymnastics for a while, but I think it’s really sinking in now.”