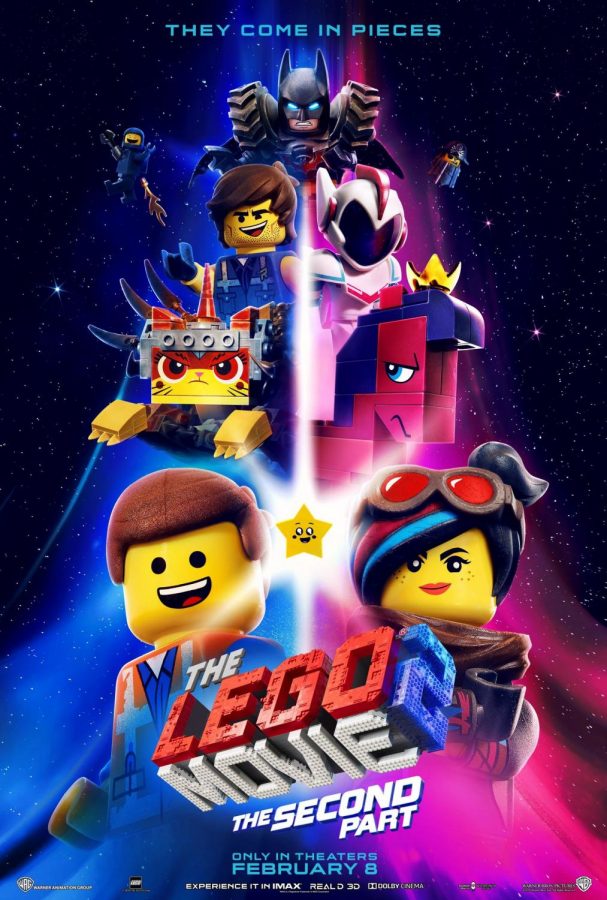 The second installment in the movie series about everyone’s favorite toy has arrived. The Lego Movie 2: The Second Part was released in theaters this month, giving toddlers, bored parents and nostalgic adults a chance to enjoy a movie in what has been a rather dry month in terms of films. The movie does not bring anything to the table that its predecessor did not, but makes for an enjoyable experience regardless. A few catchy songs and some self-referential and witty jokes in the form of plastic, Danish toys running around on screen remains entertaining, especially if one is well supplied with snacks. The only thing that really sets this movie apart is that its message is one of the necessity of harmony and bonding between siblings, rather than a father and a son.

The movie, which was teased in the final scene of the Lego Movie, begins five years after the events of the first film. The Lego utopia of Bricksburg has been turned into a post-apocalyptic wasteland by the Duplo (the larger, clunkier, less fun version of normal Legos) invaders, who represents the sister of Finn (Jadon Sand), Bianca (Brooklynn Prince). After repeated devestations, the inhabitants of Apocalypseburg have become hardened veterans, living in a desolate landscape worthy of a Mad Max movie. Emmet (Chris Pratt), remains his usual upbeat self however, and continues working on a dream home to live in with Lucy (Elizabeth Banks). Unlike Emmet, Lucy is more affected by the alien Duplo invasions and dreams of an impending armageddon. Trouble interrupts life in the wasteland when General Sweet Mayhem (Stephanie Beatriz), leader of the ominous sounding Star System Army, arrives and kidnaps most of the characters from the previous film, such as MetalBeard (Nick Offerman), Batman (Will Arnett), Benny the spaceman (Charlie Day) and the ever terrifying Unikitty (Alison Brie).

Emmet, determined to rescue his friends, converts his dream house into spaceship and sets off after them. During the long, music filled journey to rescue his friends, Emmet meets Rex Dangervest (also voiced by Pratt), an amusing parody of every half-tough character Chris Pratt has ever played on screen (think Jurassic World meets Magnificent Seven meets Guardians of the Galaxy). Much like the previous film’s Lego plot represented the Father (Will Ferrell) and his son struggling to share their vast and jealousy inducing Lego collection, here, the struggle is between Finn and Bianca vying for control. Having been raised in a home with a sizable Lego collection, I can say with firsthand experience that the struggle between siblings over Lego is real. However in my case, the struggle mostly stemmed from the fact that after my oldest brother went to college, I moved all my Lego onto his desk.

The film also addresses the very real issue of one’s mother trying to take away her child’s Lego and put it into storage. As someone who’s been successfully fighting this battle since the age of three, I can say  it is an uphill, but nonetheless worthy struggle. Toys being put in storage is equated with the foreseen armageddon, which is oddly relatable as I look back on my childhood. The message of siblings bonding in the face of adversity and peaceful cooperation between them prevails, leading to a predictable, but still somewhat sweet ending.

The Lego Movie 2 is no great masterpiece of cinema, and obviously that is not its intended purpose. It succeeds at doing everything the first film did great and here that’s perfectly fine. It doesn’t need to try anything new.  The creative team, led by producers Phil Lord and Christopher Miller and director Mike Mitchell clearly know what they’re good at. They don’t overreach and try to be profound, they made a relatable movie about plastic toys and that’s more than enough.  The movie is like a comfort food, satisfying in its simplicity. It provides the opportunity to go out, see some interesting animation, laugh at a few amusing jokes, eat some popcorn and enjoy 107 minutes of your time.