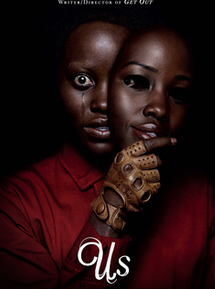 In Us, Jordan Peele continues to deliver as an excellent director and writer of horror films. Us tells the story of a family whose summer vacation is interrupted by a home invasion led by their doppelgangers. What ensues is a masterfully executed blend of horror, comedy and absurdity. Peele uses jumpscares effectively and sparingly, knowing not to overuse them. Instead, Peele tells the story in such a way that keeps the audience on the edge of their seat, fearing what’s to come.

In a major departure from Get Out, Peele wastes no time here getting straight to the horror. In this movie, there is no subtle buildup. The first scene shows a young Adelaide (Madison Curry) at the Santa Cruz boardwalk with her parents. She wanders off, arriving at a dark hall of mirrors. Getting frightened, she begins whistling and something whistles back at her. Young Adelaide then turns around, and her reflection does not turn with her.

After a terrifying credits sequence, the movie shifts to the present day, where an adult Adelaide Wilson (Lupita Nyong’o) is travelling to a beach house with her husband Gabe (Winston Duke), teenage daughter Zora (Shahadi Wright Joseph) and young son Jason (Evan Alex). The family is met by their friends, the Tylers, which consist of mildly alcoholic parents Kitty and Josh (Elisabeth Moss and Tim Heidecker) and their twin teenage daughters Becca and Lindsey (Cali and Noelle Sheldon).

After all this, the movie is only at the fifteen minute mark, and the home invasion begins. After Gabe tries to scare them off by speaking in a voice that only gets progressively deeper and shaking a baseball bat at them, the doppelgangers attack, forcing their way into the house and injuring Gabe’s leg. The Wilsons are horrified to see that they are literally staring themselves in the face. Their clones, who call themselves “the Tethered” each have their own lovely and mildly culty name. Adelaide’s is Red, Gabe’s Abraham, and the children are Umbrae and Pluto.

The family splits up and everyone is forced to confront their clone individually. Gabe manages to kill Abraham using his boat’s malfunctioning motor, in a sequence that is both frightening and laughable at the same time. Zora, a track and field star, tries to outrun Umbrae, but the Tethered moves at inhuman speeds and catches up to her. Zora is only able to escape when Umbrae gets distracted by a neighbor, who she promptly kills with her golden scissors. Jason is able to trap Pluto in a closet and hide, while Adelaide is able to break the table she was handcuffed to and the family regroups at the dock, where Gabe arrives with his boat. They then flee to the Tylers, hoping to find safety with them.

The rest of the movie is an excellent combination of horror and hilarity. Even at its most frightening and gruesome, Peele still inserts moments or lines of dialogue that force you to laugh. Speaking from personal experience, there were definitely moments where I felt like my laughter was inappropriate, but it helped that everyone else in the theater was also laughing. Us features twists, creepy symbolism and even creepier rabbits. This is one of the few movies I have seen that has made me put down my popcorn out of sheer interest. I would recommend it to anyone who has not seen it and is not discomforted by horror movies.