The G.O Elections: Who were the candidates? What did each candidate propose? Who was elected? 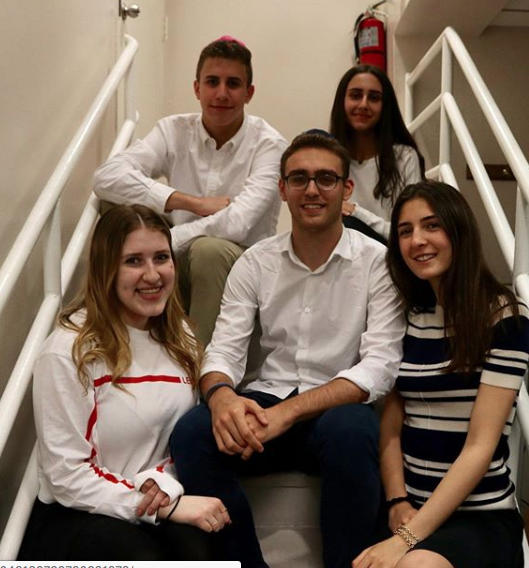 Caitlin Levine was class president for the last two years for her grade and managed to change test dates and organize finals schedules according to what the students wanted. She also proposed a coffee cart to the administration which will begin next year. Caitlin showed how being part of the basketball team and balancing school work has helped her take advantage of her free time and improve her organization. An anonymous student said “Finals are very stressful and being able to vote on the dates for each final is very important to me to relieve some stress from the amount of work Ramaz gives me.”

Gabby Schwartz spoke about commitment to the G.O. and improving Ramaz overall. She also showed how she was a great team player and would not back out of her responsibilities. Gabby is very organized gave us some insight into what she would utilize to make Ramaz better. Lastly she promised to listen to the students and be a great leader.

Gabby Ostad said she loved the students and Ramaz so much she didn’t hesitate to make their high school experience the best it could be. Gabby has been involved in after school clubs and sports teams that has taught her to work in groups and achieve goals. She also mentioned that she was a hardworking and organized person dedicated to Ramaz.

Judah Wahba spoke about his involvement in Ramaz activities and events as well as making some changes to the school. Judah is in a number of after school clubs and competitive teams. He also suggested that since there are a large number of students that prefer to eat outside of school, they should be given more privileges to leave the school during the day, especially the underclassmen. He also spoke about his ability to do things efficiently and selflessly whether it be him or another person. One of the examples he gave was about being chazan when Rabbi Albo wasn’t there and making sure tefillah went smoothly.

Maxine Pravda hopes to introduce electives to students before senior year and more opportunities to improve test scores in other subjects just like Mishmar does for Talmud and Torah classes. She also plans to add a sushi bar to the school and listen to our ideas and make them a reality. One of Maxine’s priorities is to make personal connections with the students at Ramaz and even texted them individually about events this year. Maxine has experience in leadership at Ramaz as she instituted the snack cart and surveyed all of the students on what would be served. Lastly she said that Ramaz’s enthusiasm inspired her to run as Associate Vice President of Operations.

Sophia Kremer has been the Associate Vice President of Student life for the last year and helped organize Purim and Spirit Day as well as the G.O. merch. She mentioned more weekly treats and more school spirit events. Sophia said she spoke to many Ramaz students and listened to their ideas and would continue to do so. She also mentioned a seperate app for non-academic related posts to keep Schoology more organized and easier to find our assignments. Another student said “I am very excited for this new app as, on Schoology, it is difficult to actually find my teachers’ updates and on top of that I‘ve also missed assignments because they were under so many lost airpods posts. I also think that people need to be more careful with where they put their airpods especially considering their hefty price tag.”

Sam Deutsch mentioned his role on the volleyball team, his current position on the Ramaz G.O. (the co-film chair), and the connections he’s made with students and faculty in the building. He has his own ideas but said he cared much more about the students’ opinions on how to make Ramaz better. He planned to do so by creating polls on the G.O. Instagram and listening to students’ questions and suggestions. Sam mentioned his struggles to maintain a balance between his academic and social life and said he would help other students find that balance and make their Ramaz experience even better.

Alex Zemmol and Ryan Leibowitz ran for Vice President. The Vice President is responsible for managing all the things the President does not have time for and monitoring the G.O.

Alex Zemmol is a hardworking person with a lot of care for other people. He has experience as the president of his middle school and learned leadership skills dong so. As a Brooklyn resident he can relate to other students with concerns on commute who live outside of Manhattan. Alex planned to give all students a choice on what cereals they want. He also planned to make sure that the lunch room door is open on Friday homeroom.

Ryan Leibowitz hinted at a juice press in the school and said he was a determined, creative, and Ramaz spirited individual. Ryan plans to make next year’s G.O.the best G.O. ever by making it all about the students. He claims to be the second best candidate for President so he must be a great vice president. Ryan says he will make all our dreams come true and is always available to call. After the results of the elections were made public, Ethan Rubin, known as Mitzy by his Junior classmates, said “In my three years of high school so far, Ryan Leibowitz might very well be the best G.O. vice president that has ever been elected.”

Avery Sholes, Ethan morali, and Beth Khan ran for President of the G.O. The president has the most difficult job in the G.O. and is responsible for making sure it runs smoothly. The president organizes school events and helps the other members of the G.O. with their ideas to change the school.

Avery Sholes has some experience as vice president of Ramaz and gained a better  understanding of the school and the G.O doing so. He planned to be an impactful G.O president and would completely dedicate himself to making our school days better overall by planning school events and boosting student morale. Lastly, Avery said he could make a significant and enjoyable impact on the school.

Beth Kahn said her first initiative as president would be to move the students’ scheduled free periods to last period, if possible, to allow more students to go home early. She is on the dance team, track team, and joins the friendship circle every week. All of these commitments coincide in the winter so she can relate to needing an early dismissal more often. Beth said she would use he leadership skills to help improve our school days, alleviate our stress, and get us home earlier.

Ethan Morali is on a number of clubs that taught him several useful skills as a leader. He is on Model U.N. and Model Congress which have allowed him to further develop his public speaking skills that would prove useful in order to advocate his ideas to the school. Ethan’s time spent on the soccer team has allowed him to appreciate and work with his peers even more. His peers at Ramaz have pushed him to do better and he thrives in a competitive environment. Ethan has empathy for the students at Ramaz and truly cares about them and their ideas. He believes that empathy is a necessary trait for a successful leadership role. Ethan says that with the skills he has, his perseverance, and the students, he will be able to listen to our thoughts and represent the students as a whole.