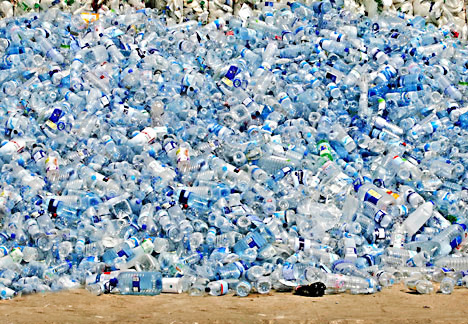 Sixty-million plastic bottles are used throughout the world every day. Twenty-two billion plastic bottles are used in a year. That amounts to eight million tons of plastic that pollute our oceans annually. That’s the equivalent of the weight of 14 million elephants. As many people know, plastic is not biodegradable. Unless it is burned (which in and of itself releases toxic fumes), plastic stays in the environment forever, and as it “decays,” it releases toxic chemicals into the environment. I know what you’re thinking. One bottle can’t hurt. But you’re wrong. It can, and I beg you to change your view that because you—yes, you—can single-handedly save our oceans.

Common knowledge at Ramaz is that water bottles in the vending machines sell out rather quickly, but there is a very clear reason for this well-known “sold out” message: students overbuy bottled drinks, and if you need evidence, take a look at the abundance of empty water, Snapple, Powerade, and Vitamin Water bottles filling up trash cans, lounges, and worst of all, classroom floors. It’s safe to assume that no students want to see their school covered in trash.

Outside of Ramaz, water bottles are single-handedly destroying the environment and the oceans that we love and cherish. If only there was a solution…oh, wait—there is. Instead of students throwing out a dollar twenty-five whenever they feel thirsty, everyone should bring a reusable water bottle to school and refill it whenever necessary. A possible setback is the common half-filled water bottle syndrome: students failing to orient their water bottles at just the right angle and ending up with sopping wet hands and not enough water actually inside the bottle. Even worse is having to travel up and down the building just get some more water: in the worst case having to race down to SC to refill at the only fill station in the school, and then race back up to your class on…SEVEN.

A simple solution would be to replace all the old fountains with fill stations like the one outside the gym. Understandably, the solution would be quite costly, but I believe it is a worthy fix to an issue of great importance. There are a plethora of benefits to this, ranging from reducing litter around the building, to saving your parents’ hard-earned cash on the vending machine, and most of all, keeping our oceans clean not only for ourselves but also for the 100 million marine animals who die each year from plastic poisoning. Let’s do this Ramaz, and reduce our plastic waste.