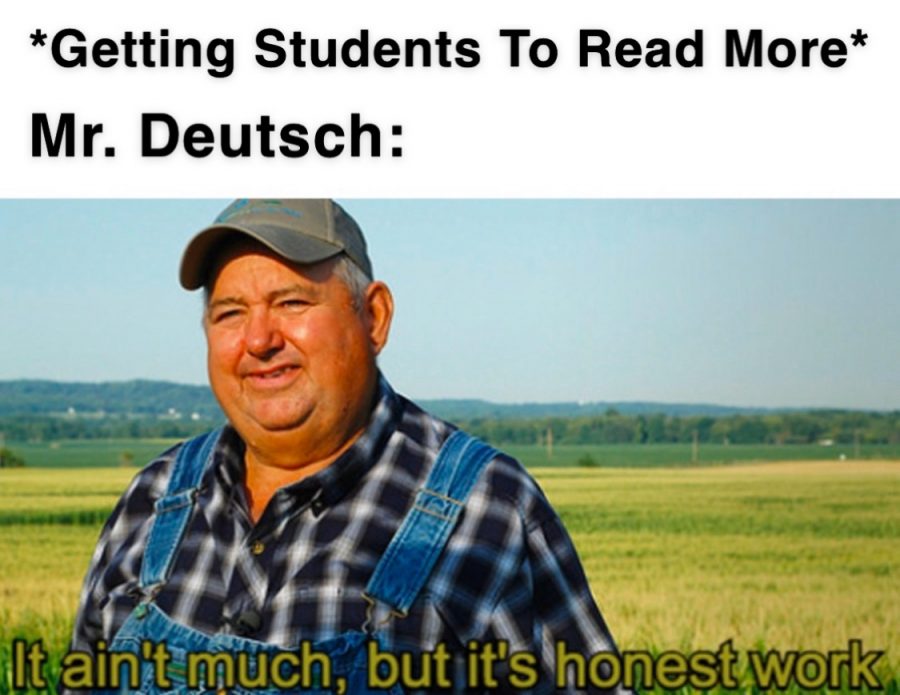 Mr. Deutsch, better known as the “The Master of Books” has been in charge of the library since last year, making impressive strides and transforming the library through several initiatives, including hosting monthly movie nights, offering textbooks for student use in the library (with the help of Rabbi Blaustein, aka “The Bookmaster”), and most recently, remodeling the library’s layout. Recently, Mr. Deutsch has taken upon himself another mission, particularly important to him: get Ramaz students to read. According to Mr. Deutsch, the first step involves filling the library with books that students actually want to read, and this past month, students were surveyed in their English classes about the types of books they read for pleasure. The Rampage spoke to Mr. Deutsch to learn more about his new initiative.

Towards the end of last year, Mr. Deutsch, along with several student volunteers, began emptying nearly all the shelves in the library. His goal was to try “to get rid of a lot of books that were outdated and/or didn’t really fit our needs,” specifically, books that had been collecting dust for many years. The next step he thought, was to “modernize our collection, and make it more relevant or appealing to the kinderlach.” And what better way to find out what the “kinderlach” wanted then to ask them? That was when he came up with the idea to create the survey. The results would generate a better understanding of which books would replace those discarded. Mr. Deutsch said that he “would much rather get popular books that kids would actually read than books that I might or other teachers might think are great, but that will collect dust on the shelves.”

Looking over part of the data collected, Mr. Deutsch has already begun making some discoveries. A large amount of the student body does not read for pleasure, which did not come as a shock. However, the part of the student body that does isn’t that small of a group. According to the survey, most of the kids who do read for pleasure, only do so once a week which Mr. Deutsch assumes is on Shabbat. One common response that Mr. Deutsch found particularly interesting had to do with the question of what medium do the students read from. A large amount of the student body said that they read from actual books—not on e-readers or on their phones. This “could certainly affect purchases,” said Mr. Deutsch. He would still like to create some sort of a “pilot program” of installing e-books and kindles into the library as well. Although they are not as popular, he believes that they are great resources and hopes to get kids more interested in them.

However, Mr. Deutsch admits that more data is necessary. He wants this initiative to incorporate all students’ opinions, however, he feels he does not yet have everyone’s input. The 10th grade, in particular, Mr. Deutsch points out, has not provided him with much information, and he is excited to learn more. However, even students who did fill out the survey did not answer as specifically as he had hoped. Mr. Deutsch noted that he would “like to get more details on specific authors that kids enjoy since it might help me do a better job of finding material kids will read.” Another survey would be helpful to give him some more concrete results.

Why is reading important though? Many students hate having to even read books for school, let alone for pleasure. Mr. Deutsch loves TV and movies, but, according to the Master of Books himself, reading “opens up whole new worlds of knowledge and imagination.” Even if knowledge and imagination aren’t concepts that appeal to you, reading remains a necessary skill for life. It should be developed and not left to waste. Mr. Deutsch stresses that reading comprehension skills will also improve writing skills, which is, of course, another valuable skill.

Mr. Deutsch’s overall goal is “to make the library a better place for the students,” and to do that, he needs the input of the students. The library of the past was a much less exciting place, but Mr. Deutsch is working on changing its purpose altogether. Mr. Deutsch emphasized that any recommendations are welcome, whether it’s a book genre you’d like to see more of in the library, board games you’d want to play, certain magazines, or even new ways to utilize the space. The library should be a place for students to do all sorts of things, and Mr. Deutsch wants to try his best to make that happen.