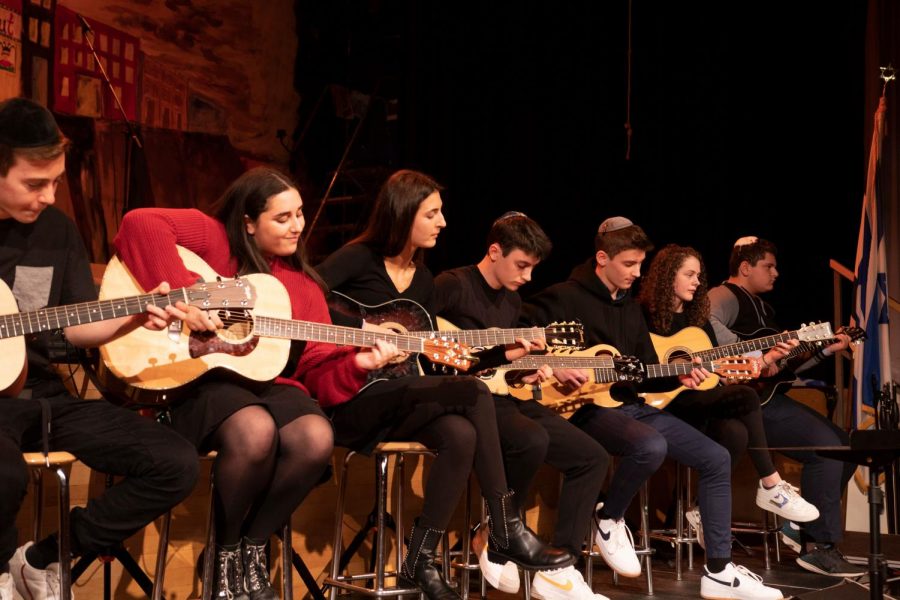 On Tuesday afternoon before an eagerly-awaited Thanksgiving break, students from all four grades strolled into the auditorium and quickly found seats next to their friends to experience Ramjam. The room buzzed with excitement as the stage was illuminated with bright lights and filled with performers running through last-minute details to perfect their acts.

As the noise simmered down, student host Sam Deutch ’20 began with an introduction, quickly overpowered by the synth, keyboard, and drums of the Ramaz Band’s version of “Sucker,” exciting the students. The Chamber Choir, Dance Team, and Guitar Ensemble showcased their talents with their upbeat acts. As the Chamber Choir sang and Judah Wahba ’20 belted out his solo, friends began cheering and shouting his name. The Dance Team moved to strobe lights, reflecting the audience’s excitement.

Julia Feit ’22 said that this year’s show was even better than last year’s because, “I felt that everyone had more energy this year, and my friends and I were more enthusiastic because we had already experienced Ramjam last year.” Yearbook Co-Editor-in-Chief Aliza Freilich ’20 said, “The show was sooooo great! We got such amazing pictures on our camera that will make awesome content for the yearbook.” Members of the audience were a little upset because every time they tried to take a picture to capture the moment, a teacher would rush over and tell them to put their phones away. Students said that the show was amazing, but they just wish that they were able to take pictures, turning the whole feel of the event into something more casual and student-run rather than a formal concert or performance. However, even without the pictures saved, the show was outstanding and thoroughly enjoyed by all. Students left the auditorium thoroughly satisfied and eager for next year’s show!