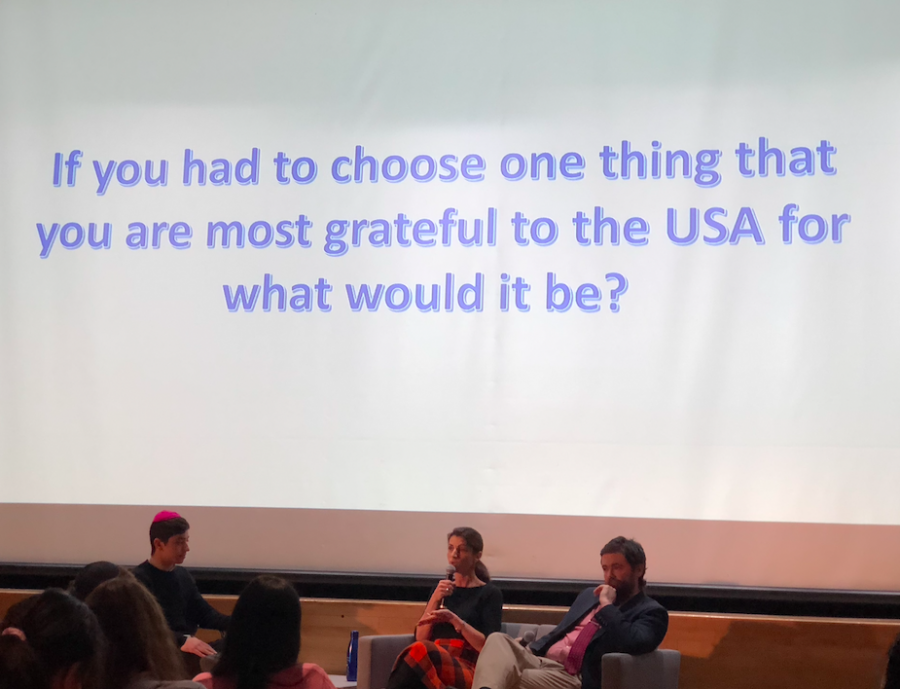 “A commitment to democracy.” These words can be found on the Ramaz mission statement, which proudly hangs in every classroom and is even painted in the staircase. But what does this core Ramaz value really mean? How can students show their “gratitude to the United States of America”?

This past November 27th, commonly referred to as Erev Thanksgiving, Ramaz students convened to honor the day with a Community program. Rabbi Albo began the program discussing the importance of “reviewing together our shared values,” later continuing in an interview, “These values are not just something that’s from top down, but, rather, us all, as a community, we really do share these values. These are our values that we really do believe in.” To emphasize this point, five students from all different grades each read one of the core values, including commitments to: menschlichkeit (refinement of character), the Torah and mitzvot, the State of Israel, the pursuit of knowledge, democracy, and a responsibility to all Jews.

For the body of the Community, host Gabriel Kraiem ’20 interviewed two Ramaz teachers: French teacher Madame Julie Bellaiche and math teacher Dr. Fabio Nironi. Much like a real talk show, the interviewees sat on a couch across from Kraiem. Kraiem has recently started Ramcast, a podcast for Ramaz. Rabbi Albo said, “I thought it was a very impressive initiative, so I gave him the ability to essentially do what he would do in a podcast in front of everyone. This was to promote his podcast and bring it to life for the students.”

Both interviewees immigrated from European countries and felt it necessary to express their gratitude to the United States (U.S.). Kraiem introduced the interviews by explaining that, “Many of our parents and grandparents who immigrated not just long ago now have better lives.” Therefore, it is important for Ramaz students to devote Thanksgiving to being grateful for the opportunities that the U.S. has given them.

Madame Bellaiche, a French Jew, explained that her family moved to the US for her husband’s job. They planned to stay for only three years, until her and her husband realized antisemitism was rising in France. She explained to the Ramaz students that “people were protesting and starting to scream things like: Jews out.” Ramaz students were shocked and sat still in the auditorium, picturing living among those types of protests.

Dr. Nironi, a German Catholic, spoke about why he was motivated to come and his transition into American society. Dr. Nironi was a researcher and received an offer from Columbia University to do a postdoc in New York City. “People were telling me that when the young come to New York City, they usually stay. That’s essentially what happened. I’m still here and I’m very appreciative,” said Dr. Nironi in a powerful statement. The room erupted in applause for him.

Both Dr. Nironi and Madame Bellaiche spoke about the process of assimilating into American society. Once in America, Madame Bellaiche realized that “I am very French!” The cultures have many great differences. Madame Bellaiche was forced to overcome the language barrier, but still confesses that speaking English sometimes makes her nervous. Additionally, she is impressed with Americans’ optimism to keep going no matter the challenge.

Similarly, Dr. Nironi constantly notices differences between the busy city and his home country. When he moved, Dr. Nironi was impressed by the enormous cars, but, at the same time, he misses the squares and cafes of Europe. Dr. Nironi does appreciate how different his life is here in America. He met a wife in America and his children are now growing up American, very different from Dr. Nironi’s personal upbringing.

To conclude the Community, Ramaz alumnus Corporal Yaron Porter gave a moving speech about his gratitude for the U.S.. Porter joined the US Army in 201 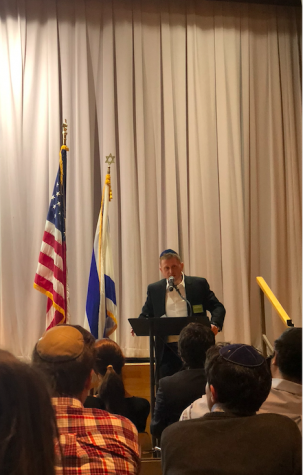 0 and for the next four years, he spent most of his time as a national guard. Then, in 2018, Porter enlisted in the Israel Defense Force and became a snipper. A month ago, Porter reenlisted to the National Guard.

Corporal Porter’s remarks moved the crowd. Ramaz students were mesmerized by his dedication to the US Army as well as the IDF. Porter told the students that his parents fled the Soviet Union in 1979 on the last flight out of Russia. While his mother, an opera singer, was not accepted by any Russian conservatory because of her religion, in the US, Juilliard welcomed her. Porter summarized, “America has given my family and myself the opportunity for more than just economic success. It gave us the opportunity for religious freedom and personal freedom. That is why I served.” The program finished with a prayer for peace and the U.S. National Anthem.

Ramaz students’ perspectives varied regarding this Community. Some students really appreciated the time together before Thanksgiving and learning more about their teachers. Ita Newman-Getzler’21 said, “I enjoyed the interviews because it was interesting to hear different views and get to know my teachers.” Eliana Capelowicz ’23 was excited to be with the upperclassmen, stating, “I feel like in the middle school, the fifth graders were always separated from the rest of the school. It was nice that the freshmen were included during this community.” Students were especially impressed by Corporal Porter. Charles Spielfogel ’21 said, “The Ramaz alum was so cool. He has served for two armies and he is really giving back, which is amazing.” Braydon Serfos ’22 said, “It was definitely interesting to hear from the corporal, but I wish he talked more about his service, instead of saying the prayer.”

Other students were confused with the context of the program. Ethan Rubin ’20 said, “I didn’t see the program’s relevance to Thanksgiving, but it was good to hear about where our teachers immigrated from.” Jessica Moskowitz ’22 agreed, saying, “It was nice to come together, but I think other activities could have been more relevant to the holiday.”

Rabbi Albo, the organizer of the program, explained that he wanted to represent “another facet of showing gratitude United States of America. This country really is a country that’s built off of immigrants and there isn’t a single person in this building, who either themselves, their parents, or, at best, their grandparents were not an immigrant to the United States.” Rabbi Albo wanted to help students find a personal connection to Thanksgiving. Additionally, Rabbi Albo wanted to avoid a Thanksgiving lecture. He is sensitive that “our kids are so overwhelmed with formal lecturing throughout the day here, and I didn’t want it to be another class.”

Thanksgiving is a day of appreciation for the U.S. and the freedoms it provides for every citizen. Students were in awe of Corporal Porter and enjoyed learning about their teachers lives, even if some failed to see its relevance with the day. One of the student mission statement readers, Maya Chaovat ’21, said, “I am proud to represent the values of Ramaz and it was nice to intertwine them with the values of Thanksgiving.”