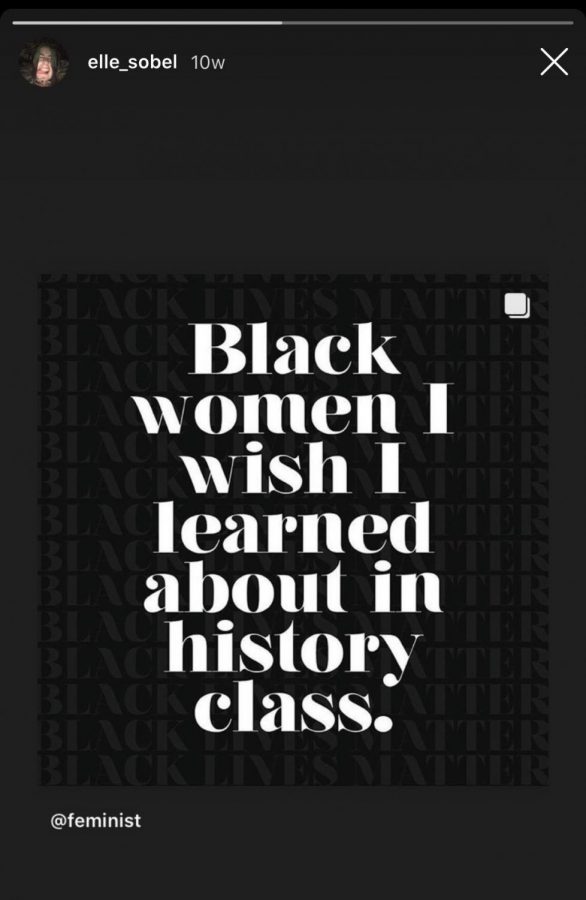 Eliana Sobel ‘22 showed her support for the Black Lives Matter Movement by posting this on her Instagram.

As a leader in Jewish education, Ramaz’s students are expected to have a broad understanding of American History and the forces that shape our current political and social climate. Ramaz has the responsibility to educate students about the world with particular emphasis on the plight of oppressed minorities with whom we so strongly identify. Throughout history, Jews have been victims of oppression and targets of persecution. Despite the challenges, the Jewish nation has played a central role in shaping the modern world and impacting society. As a minority in the United States, the Jewish people must recognize the injustices towards other religions and races, which closely resonate with us.

In identifying with an oppressed minority, one of the charges of Jewish education is to teach about Black history. In a short four years at Ramaz, the history department must prioritize which aspects of history align with the ultimate goal of cultural literacy. Dr. Jon Jucovy, head of the history department, explained, “Throughout our history courses, we develop a theme. At the beginning of our curriculum, humans thought in terms of order and stability. However, they quickly learned that things ultimately disrupt that stability. Despite their best efforts to restore the original situation, they never succeed in doing so. We make certain choices in planning the curriculum in order to best illustrate this theme and ensure that our students have the knowledge of well-rounded citizens of the United States.”

In light of the current Black Lives Matter movement, many students are hungry for additional education about Black history and the role of the police and government in our daily lives. However, Dr. Jucovy stated, “I’m not a believer in the idea that we should learn about something because it’s driven by a present political movement or cultural attitude. There are many different types of minorities, and I don’t see a need for necessarily incorporating the history of a minority into the curriculum just because they are a minority. For better or for worse, the world and the United States have been shaped by various forces and groups of people.” Dr. Jucovy recognizes that Ramaz students will have varying interests and exposures over the years, but the foundations of their education should provide them with the tools to explore those interests even if it’s not explicitly part of the curriculum.

Many students expressed interest in an integrated approach to Ramaz education, in which unique topics such as Black history, women’s history, and minority rights are interwoven in the curriculum across multiple disciplines. Clementine Roth ’22 explained, “The history curriculum could be improved by extending the same themes in various classes –such as Talmud, English, art, or music– to give us a more diverse learning experience. By better relating the material in each of our classes, we would learn a more complete, well-rounded history. Discussions in history class should be used as a starting point to further the ideas in other classes.” Throughout Dr. Jucovy’s years of experience at Ramaz, he explains that collaborative learning is becoming increasingly prevalent in the school. Jordan Mittler ’22 added, “Collaboration between the Ramaz Middle School and the high school would greatly benefit students and ensure that the curriculum isn’t repeated twice. Ramaz teaches African American history when it falls in line with the curriculum, but I don’t think there has ever been a unit dedicated to African American history.”

Ramaz has always been a school with a strong social conscience. Traditionally, the Ramaz community has embraced causes that champion equality and protect the minority. Clearly, the administration recognizes the importance of weaving Black history into the diverse curriculum and empowering students to explore different political and social movements.