A Tribute to Ms. DeeDee Benel

Ms. Benel and her students in Peurto Rico on a chesed mission in 2019.

After a lifetime of dedication to numerous chesed initiatives in the Ramaz Upper School, Ms. Deedee Benel, Educational Director of Student Programming and Chesed, is retiring. The Ramaz community was disheartened to learn about Ms. Benel’s departure. Her commitment to inspiring students to work together within the larger community, and her ability to encourage each student to reach beyond what they thought was possible by participating in acts of kindness will truly be missed, and will leave behind a huge void at Ramaz. Many students had the privilege of working with her and have been impacted by her selfless actions and sage advice.  Her mission work began in 1987 when she led a group of students to the former Soviet Union, and together they visited Refuseniks and had the memorable experience of meeting Rabbi Adin Steinstalz z”l in an underground yeshiva. Throughout her 33 years at Ramaz, Ms. Benel planned and launched countless chesed events, including community outreach programs, led numerous clubs and student activities, and ran the administration of the SAT at Ramaz, just to list a few of her accomplishments in the community. She was involved with Pink Day to raise awareness for Breast Cancer, Purple Day to raise awareness for the Shalom Task Force and Domestic Violence, the Tzedakah collection on Fridays, a Thanksgiving dinner for Veterans, the Yachad Shabbatonim, and the Yachad Ambassador Board. She also encouraged students to read the Megillah for patients and doctors at Lenox Hill Hospital on Purim, traveled with students on the missions to Puerto Rico to help after Hurricane Maria and Irma, gently prodded every sophomore to complete his or her chesed hours, invited students to the “Carry the Load’’ programming near the World Trade Center in commemoration of Memorial Day, and so much more. The list goes on and on. Most recently, during this Covid-19 pandemic, Ms. Benel, together with students, sent hundreds of food packages for health workers in hospitals throughout NYC by partnering with KosherResponse.com, as Ramaz’s way to recognize the courage and dedication of the health care providers. In addition, Ms. Benel provided innumerable students’ and teachers’ families with help and assistance during their most difficult times. Ms. Benel sent flowers and letters of encouragement from herself and the student body to members of our community who were ill, lost a loved one, or was in a devastating situation and needed support from their close colleagues and friends at Ramaz and Kehilath Jeshurun.

So much of what Ms. Benel did for our community was completed behind the scenes. My personal connection to Ms. Benel stems from my participation as a freshman on the mission trip to Puerto Rico. Weeks of planning went into gathering supplies for those less fortunate and numerous sessions were held to make sure that the students on the mission were well-taken care of. This was all done on Ms. Benel’s personal time. My friends and I were so influenced by her dedication that we were inspired to reach out to our own communities when we returned home and incorporated chesed into our daily lives. In addition to the missions in Puerto Rico, Ms. Benel led a mission to New Orleans in 2005 in response to Hurricane Katrina to help in the rebuilding of homes devastated by the hurricane and support the victims of this horrific storm.

While she motivated so many, her students inspired her to visit Whitwell, Tennessee, and interact with Christian students who designed The Paper Clips Project and collected 11 million paper clips to commemorate the innocent people who were victims of the Shoah. The Ramaz students who participated were grandchildren of survivors, and this was the first time the Whitwell students met Jewish youth.

Ms. Benel also made sure to include students and their families into chesed and outreach. I will always be grateful for the role that Ms. Benel has played in my family’s connection to Ramaz, namely through the Veteran’s Day programming. Ms. Benel invited my grandfather, a navy veteran, to speak at a Veterans Day assembly and welcomed my whole family to hear him speak. My grandfather was honored to have been able to speak, and my family was so appreciative to have been invited.

Ms. Benel was recognized in a Ramaz virtual program, on August 20, 2020. There, it was noted that Ms. Benel’s devotion to Ramaz and the greater community will be missed and she was thanked and honored for her astonishing 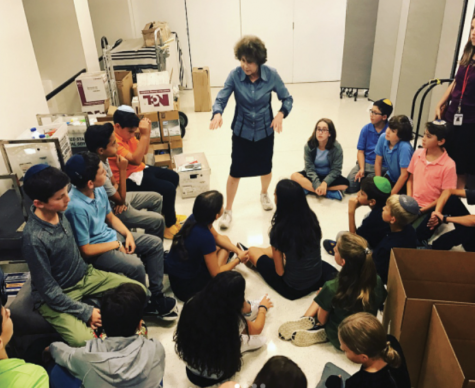 commitment to chesed. Sophie Dahan ’19 recalled memories of Ms. Benel during her time at Ramaz. Additionally, Dahan noted that Ms. Benel was always there for her and voiced her admiration and appreciation for Ms. Benel. Following Dahan, Rabbi Haskel Lookstein, Principal Emeritus, shared his experiences and gratitude for Ms. Benel and he recalled the time when he first met her. Ms. Benel shared some inspirational words and encouraged the community to keep on participating in chesed. Alumni and current students paid tribute by sharing their memories of their experiences with her. Ms. Benel is so universally recognized as exuding chesed that she was awarded the Loving Kindness plaque by the Ramaz School. She is indeed the personification and embodiment of chesed!

Many students are enormously grateful to have worked with Ms. Benel and thank her for all she did during her time at Ramaz. Samantha Sinensky ’21 said, “I had the opportunity to work with Ms. Benel, who was the faculty advisor of the Environmental Club. I witnessed first-hand her attention-to-detail, love, and passion for our club, and for every other program she led. Her dedication to Ramaz and the students was extraordinary. She really did the work of ten people. ” In addition to the Environmental Club, Ms. Benel also led and guided the Challah Baking club, the chesed club, and influenced many more. Jordan Mittler ’22 worked with Ms. Benel to institute chesed into the daily lives of Ramaz students and faculty. Mittler said, “My first two years in high school would not have been the same without Ms. Benel. I was involved in so many amazing and meaningful experiences because of her commitment and motivation to Ramaz’s chesed. She is irreplaceable and I am going to miss our numerous conversations and projects at Ramaz.” Rebecca Massel ’21 was inspired by Ms. Benel’s Yachad programming, saying, “She taught me to speak up for what I believe in through her example of how to plan a program and how to affect change. For three years, I watched her stand in the center of a room and find the perfect words to generate interest in any event. When [Michal Seinfeld ’21 and I] wanted to add to the Yachad programming at Ramaz, Ms. Benel encouraged us to start a Yachad Ambassador Board and worked with us through every step.”

A large void will definitely be felt as we return to school this fall. As Julia Feit ’22 said, “Ms. Benel always put other people’s needs before her own and contributed so much to the school. She will be missed by all her students.” We hope that Ms. Benel enjoys her retirement and knows that generations of Ramaz students have been influenced by her selfless dedication to her projects that benefited all of humanity.