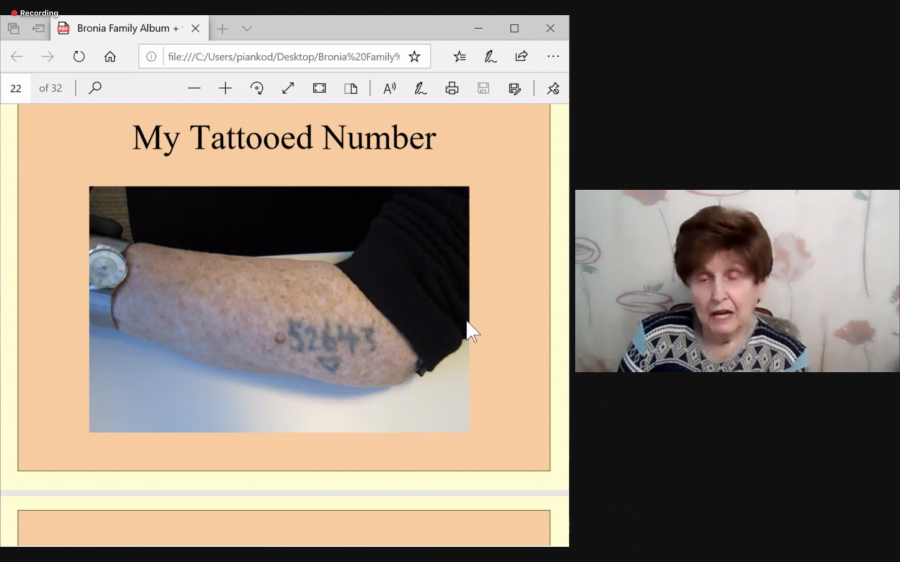 On Thursday, April 8, in honor of Yom Hashoah, Holocaust Remembrance Day, The Ramaz Upper School welcomed Bronia Brandman. Ms. Brandman is a 90-year old Jewish Holocaust survivor who has dedicated her life to educating others on the Holocaust, as anti-Semitism continues to spread today. She was born in Jaworzno, Poland, in 1931. Soon after the war began, Ms. Brandman and her family were sent to concentration camps, where she would never see her family members again. Her Zoom presentation began by defining the severity of the number of deaths during the Holocaust, which is unimaginable and quite intangible. She spoke of her family and her idolized sister Mila while explaining how her life quickly changed from joyfully singing “London Bridge” in her backyard to one of the largest genocides of all time. As the last generation able to hear from Holocaust survivors, over 325 Ramaz students kept open ears when listening to Ms. Brandman.

EV: During your presentation, you spoke about how during the Holocaust, The New York Times relegated an article about the war to the back page, while an article on tennis shoes made the front page. Additionally, now that people are advocating for minority groups through the media, Jews are frequently forgotten in this activism. What would you say to today’s youth about how they should take action when seeing Jews being silenced?

BB: I think Ramaz students are prepared to be active because they are highly intelligent. They wouldn’t be admitted if they weren’t. I think overall, in the United States, there is a herd mentality. People do the same thing just because others are also doing the same thing. Some politicians spout anti-Semitism and hate today. Social media platforms are filled with anti-Semitism. We even have universities that are anti-Semitic. The media is very biased. This becomes a problem when you treat any single source like a Bible, especially when that source manufactures facts. People should read the media that comes out of Israel. Some people are scared to speak up, but that is not what a democracy is or is supposed to be. Intelligent people should not accept that. Words can kill, as we saw in the Holocaust.

EV: Many countries have been criticized in retrospect for failing to address the rise in anti-Semitism in Europe during the decades leading up to the Holocaust. How do you think international governments, particularly those of Allied countries, should have acted?

BB: European countries were very anti-Semitic. Some Non-Jews risked their lives to save Jews, and I call them saints, but that was a fraction of one percent. So we make a big deal of it because it was a huge sacrifice. In 1938, there was a conference of 38 countries to answer the question, what could we do to help the Jews. Absolutely nothing came out of it. Can you imagine 38 countries meeting, knowing what was at stake for humanity? And getting away with making no commitment, even though the world knew the Jews were being murdered in cold blood. Other countries even reduced the immigrant quota during this time so fewer people could enter.

EV: Currently, Uyghur Muslims are being tortured in Chinese camps. Over one to three million are currently detained. It seems to be paralleling the Holocaust, yet not much change is being initiated. When I first heard about this, I was furious that the world was quiet after we promised: “Never Again.” What would you recommend the youth, as well as government officials, do to take a stand against this?

BB: I don’t believe the world should allow anyone to do this, but an awful lot is going on that we had no control over. China is not a democracy. It’s a socialist country. They regulate and decide everything, and unfortunately, America does not have much say. You are dealing with a country that is implacable. We do not know what steps yet the Biden administration will take. I don’t know whether we have the same leverage with China as we did with Russia. I think it’s very sad.

EV: Most of my grandmother’s family died during the Holocaust during Babi Yar in Ukraine. Like many others from Europe, my family has a shortage of pictures of our family members. During your presentation on Yom Hashoah, I couldn’t help but wonder how you were able to keep the many photos of your family members, siblings, parents, and of course, Mila throughout the Holocaust?

BB: I did not have as much as a pin from home, let alone pictures. Everything was taken away from us. The only possession I had for two years was a bowl and wooden clogs. I had nothing else. For some reason, these pictures were kept by a cousin who was a soccer player who lived in Vienna. He was very well-trained. When Nazis were beating the Jews, he would beat the Nazis back. If he were found, they would hang him on a tree. He was forced to escape Vienna. He escaped to Italy, then Portugal, and eventually America. He was very family-minded. He was the one who brought my brother and me over to America. We lived with him in a spare room in his apartment. He worked two shifts to support us. He is why I am able to show pictures of my family. He has an extensive array of family pictures, cousins, second cousins, and rabbis that were part of our family of achievers. It is amazing.

EV: When do you recommend that parents, both Jewish and Non-Jewish, should begin educating their children about the Holocaust, as it is an important yet distressing topic?

BB: Theoretically, you can start young. First grade is too young, but there are children’s books that are geared to early students. It’s a matter of opinion and probably depends on the child as well. I did not speak about it for 50 years, did not say a word. I could not laugh for 25 years, and I still cannot cry in the face of adversity. I think you should start early because children are receptive. You gear it to the age of the child. I don’t think they have the concept of understanding fully what it was like. You can tell by some of their questions. It can start at age 10 or 11 for sure.

EV: What inspired you to write your book, The Girl Who Survived? Why did you specifically tailor it towards youth? What was the most challenging aspect of writing it for this audience?

BB: Before I began speaking about the Holocaust, I was a volunteer gallery educator for a long time, because as a survivor, I had first-hand experience. I was 12 when I came to Auschwitz, so I am a unique survivor. Once, when I was a gallery educator, a group of teachers from New Jersey came, and it was my turn to take them around. One of them heard my story and decided that she must write a book about my experiences. First of all, I did not think I had the capability of writing. Second of all, I didn’t think it would be ever published. But she was a big optimist, so she felt that she’d find a way of publishing it. So, we spent a lot of time together when she interviewed me. I corrected the parts where she was mistaken. And then, she wrote the book, and she decided to write it for ninth graders. She did all of the writing and was responsible for publishing it. It was published by Scholastic, which was good because it reached children in school.

EV: There are numerous statistics stating the insufficient education regarding the Holocaust; 60% of Millenials do not know Auschwitz existed, and 1 in 8 Americans haven’t even heard of the Holocaust. Given this information, what do you think the United States’ school systems should do in order to educate the youth on the Holocaust better? How and when should it be approached in their curriculums?

BB: It should be part of the curriculum because nothing had ever happened on that scale in history. The population should be aware of what humans are capable of. We should prevent that from happening again. People must learn that words can kill, and they did. Jews were compared to an infestation of bugs; by reading that in newspapers, people started to see Jews as bugs and not people. We have to counter this by appreciating humanity. Jews have been hugely successful in improving the world: Einstein and endless other scientists.

EV: The American Jewish community experienced the highest level of anti-Semitic incidents last year since tracking began in 1979, with more than 2,100 acts of assault, vandalism, and harassment reported across the United States, according to new data from ADL. Given the rise in anti-Semitic hate crimes recently, what would you say to today’s bystanders after witnessing the atrocities of the Holocaust?

BB: I have a choice. I can be negative, but it’s not going to be good for me. I also could decide to live positively. I cannot change the past. I cannot predict the future; the only thing is now. And the healthy way is to approach life; I think it’s a Jewish way, is to be positive and hope that things will be well. You have to be positive for self-preservation. I must tell you; I am very proud of us Jews. Just think — anyone named Cohen or similar to that has the same genes as the original ancient clergy 3,000 years ago. In spite of the fact that we were being persecuted practically in every generation, there is genetically something very vital and very important about still being here, and we still thrive. Look at Israel — despite being threatened with terrorism and murder, they thrive, and they produce things the whole world benefits from. They are an oasis of democracy. How can they live this way? Positivity. I am very proud of Ramaz students. I want to see them rescuing us in the future.