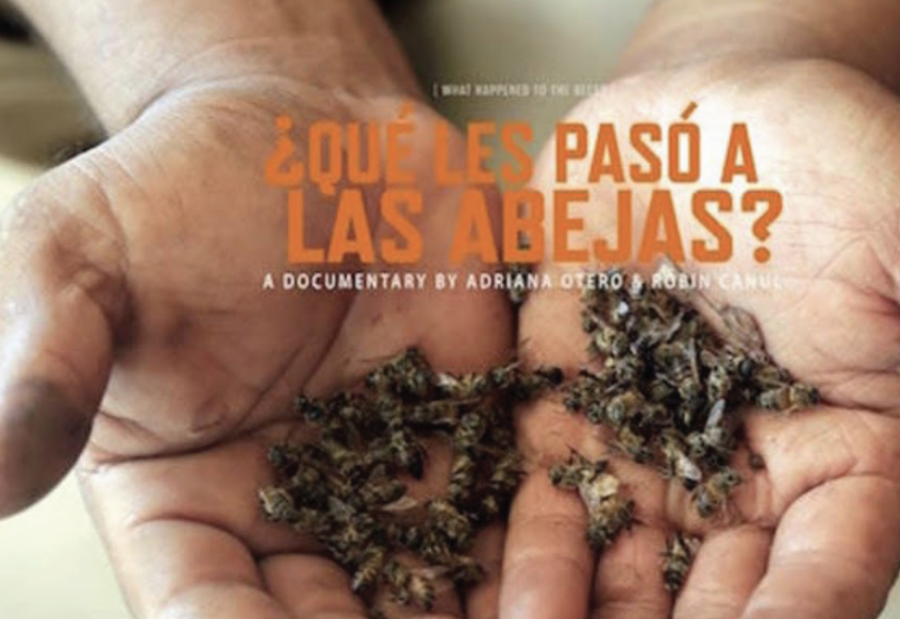 The Latin American Culture Club (LACC) interviewed the creators of the “What Happened to the Bees” documentary: filmmaker Adriana Otero, film-maker, and Gustavo Huchín, Mayan bee-keeper and activist. The documentary exposes the legal use of toxic agrochemicals all over Latin America, specifically in Mexico, killing millions of bees. Beyond a scientific point of view, the documentary portrays the “socio-environmental conflicts taking place in indeginous Mexican territories” and the toxins used by giant pesticide companies threaten the health of Mayan beekeeping communities.

LACC: What inspired you to make this documentary? Please talk about the support you received, budget, film technique, duration and challenges when filming it, launching and audience reaction.

AO: In 2015, I found out the bees were dying near my area and I was immediately inspired to create the documentary because of my love for nature and animals. I chose this theme because I wanted to raise awareness about social-environmental conflicts taking place in indigenous Mexican territories. The film’s budget was 122K and we received support from many people, institutions, and organizations in Mexico and other countries. The film was shot with small cameras in 4K format as well as drones for landscaping and jungles. One of the struggles of creating this documentary was putting together such a complex story in just sixty minutes. Although the documentary won several awards at international festivals, the most satisfying thing is knowing that there are people who want to find ways to support the cause.

LACC: Why did you choose the theme of the bees in the Yucatán Península? Please talk about if this happens to other communities in Mexico or Latin-America such as Argentina.

AO: I chose the topic of bees because as soon as I found out that bees were dying near where I lived, I realized bees were the most important living thing in the world. No films or programs spoke about the importance of this topic. I understood that human beings depend on bees and the bees depend on us. The death of bees is happening all over the world– especially Mexico, Argentina, and other parts of Latin America. This is a global issue and therefore we should all be interested in helping the bees.

LACC: Why is it important to present and highlight the work of the Mayan community leaders Leydy Pech and Gustavo Huchín?

AO: It is important to show the organizational capacity of small communities and the achievement they obtain. My goal was to show the strength

and security of Leydy Pech and Gustavo Huchín and in relation to the community as they found a way to fight against government and businesses in a non-violent way. I wanted to represent Indeginous women in this type of case where women actively participate in decisions. I think it is a way of demonstrating and empowering women in our communities where their voice is necessary. On the other hand, having someone like Gustavo as one of our protagonists was perfect for the documentary because he conveyed emotions of empathy to the public. Because of his nature people are able to understand his love for bees and the environment. It is an honor to have him with us now and in the documentary.

LACC: What motivated you to fight for the Mayan Community lands’ rights?

GH: They were killing bees in my municipality and it was hurting me a lot. I had to initiate the fight against the killing of the bees. Bees are very good for the economy. We send our children to school, buy clothes, and are able to put food on the table because of them. The Mayan people love nature, so I could not stand by and do nothing.

LACC: Can you please talk about the impact of transgenic crops on our ecosystem, public health, economy and Mayan Heritage?

GH: Killing the bees has a tremendous impact on our economy. I don’t know what would happen to the economy with the death of the bees. Aside from the economic aspect, which is huge, is the health part of this. A lot of the pesticides in the field that are killing the bees are also killing people; the glyphosate can cause Cancer. The toxins contaminate the water. Anywhere you go, you do not know what you’re drinking. We need to take care of our families — my grandchildren, my nieces and nephews, everyone. My grandparents instilled in me caring for the bees. It’s part of me, I feel very connected to nature. If the bees disappear, not only do they die, but also the Mayan community and our heritage.

LACC: Can you please talk about the laws and rights to buy and cultivate the land in Mexico? Who are the Mennonites? Why are they allowed to cultivate transgenic soy in Mayan land? What is the State of Mexico doing in order to eradicate this problem?

GH: The Mexican government only cares about producing grains and the economic factor of this situation, not caring about if the toxic chemicals kill the bees. They care more about what it could produce than the actual agriculture that has been passed down from generation to generation. The Mennonite heritage is German, and the state of Mexico allows them to buy the land because the Mayans cannot buy the land. They feel they are entitled to harvest anything that they want. It is a big business for them regardless of the harm they are doing to the bees or the pollination of the crops. Many of my friends, the members in my communities, have lost crops and have lost bees. They have been displaced as farmers to the city to make a living in anything.

GH: The laws in Yucatan are very weak and practically nonexistent. The government is the one with the real power to buy and sell and choose who gets the land. The mennonites have a lot of money and also a lot of the machinery to come in and buy land. The government is the one that allows it to have it. They have an agreement with the government that they are very active in acquiring land, but not in politics. Mennonites are originally German but then moved to Canada and then Mexico and other Latin American areas, like Venezuela, Argentina, Columbia.

LACC: What other pesticides are used in crops? Are there other transgenic crops such as African Palm Tree and Sorghum affected?

GH: Not only are Mennonites causing deforestation, but they have made absorption wells, where many of the farmers in the community have not been able to get the water. Besides the bees, the Mayans have tried to complain to the authorities, but no one is listening to them. They have not been fined. There are no repercussions to the community. There are many other pesticides and herbicides that are used.

LACC: Can you please talk about any proposal that the Mayan Communities Leaders would like to implement as a precise and more effective sustainable development?

GH: We’re already proposing to use more organic cultivation. We are not going to use any more chemical fertilizers, and reduce the use of pesticides. They’ve been doing this for two years already, especially with products like corn and beans. With beekeeping, we are also only doing it through natural means. We grind natural garlic to keep away pests. In Calisco, Mexico, they’ve already had positive results with the natural fertilizers.

LACC: How can an individual keep the right to pursue his or her beliefs when a State and many other people are against you?

AO: It’s very difficult to fight for what one believes when there are so many barriers that stand in the way. The Mayan community has been fighting for ten years. Talking with them, they told us they were very tired. It was very disappointing that the authorities did not enforce the law, and the people continued to use pesticides and grow transgenic crops in Mayan soil. However, when the community realized that people like us were taking an interest in the issue and that we support them in this struggle, which is not just their struggle but of all of us. That is a way of transmitting strength to them to continue. Ancient grain motivation, as Mr. Gustavo said, is precisely the question about the natural heritage that we are living. For example, to you who are young and going to be interested in giving the best to your children and generations that come. If we get involved in the struggling our communities face, I am sure we will achieve great results.

LACC: How can we become exemplary and fair community activists? How can we help you?

GH: We have to be able to learn how to speak up, and have to be brave and stand up for what we believe in in our community. The toxic chemicals that they consume through food is bad for the people, the bees, the water, and the environment so it is important to learn how to speak up after being educated after learning about pesticides. Now that you students have learnt about this, I urge you to take a stand for whatever it is you believe in.