Latin American Culture Club Meet the People of “What Happened to the Bees?” 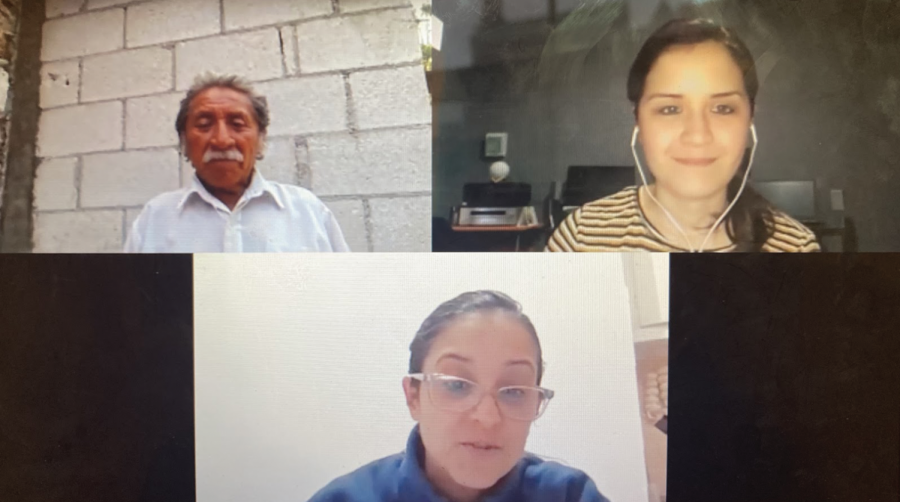 As a part of the Spanish Language curriculum at Ramaz, several of Dra. Roldán’s classes had the opportunity to watch Adriana Otero’s documentary, “¿Qué les pasó a las abejas?” or “What happened to the bees?” The Latin American Culture Club was immediately inspired to educate as many people as they could about the current bee crisis in Mexico and other parts of Latin America. The club reached out, and on March 18, hosted both Adriana Otero, the creator of the documentary, and Gustavo Huchín, a Mayan beekeeper and activist from a municipality in Campeche. Spanish classes created detailed questions that were asked by individual students in an interview with Adriana and Gustavo.

The bee population has been in crisis over the last few decades with the increased use of pesticides. From 1947 to 2008, the bee population has declined by 60% — from 6 million to 2.4 million. If the bee population dies out, it would have a catastrophic effect on Earth’s ecosystems. Not only would this lead to many plants and food crops dying out, but the animals that rely on those foods will also die out.

Though the honeybee population is declining around the world, this problem is highlighted in Mexico because of the increased use of pesticides in their farming. Agribusiness giant, Monsanto, creates and sells genetically modified, or transgenic, soybean and other food crop seeds to farmers. These seeds are resistant to Monsanto’s pesticide, Roundup, which contains the active ingredient, glyphosate — a chemical hazardous to human and animal health. This issue is particularly severe for the Mayan community in Mexico, whose livelihoods depend on the cultivation of honey.

Documentary “¿Qué les pasó a las abejas?” or “What happened to the bees?” was created in 2018 by filmmakers Adriana Otero, Robin Canul, Marines Roque, and Amalia Cordova. In 2015, Adriana Otero found out the bees were dying near her area and immediately was inspired to create the documentary because of her love for nature and animals. She chose this theme because she wanted to raise awareness about social-environmental conflicts taking place in indigenous Mexican territories.

The documentary opened many students’ eyes to the bee crisis. Eliana Cepelovicz ’23, a co-founder of the Latin American Culture Club, said she did not know about the bee crisis before watching this documentary. “It’s critical to educate yourself about issues happening outside of the U.S. or one’s own culture,” Cepelovicz elaborated. Daniela Woldenberg ’23, another co-founder, said that she never realized the extent of the horrific situation.

Unconventionally, students preferred that the film was a documentary as opposed to a movie. “I liked that it was a documentary,” said Woldenberg, “because it made it feel more authentic.” Seeing the people afflicted by Monsanto brought the issue to life for the students. However, students wished that the film was more accessible. “I want more people to learn about this crisis,” said Woldenberg, but unfortunately it is currently only available in Mexico.

Students of the Latin American Culture Club also had the opportunity to interview Gustavo Huchín, a Mayan beekeeper and activist who helped lead the fight against Monsanto. Gustavo was inspired to act when he watched as bees were dying off in his community. Bees are essential for the economy of his community, as honey cultivation has been the main livelihood within the community for generations. Not only do these chemicals kill the bees and have a devastating impact on the economy, but they are hazardous to the health of the community. If the bees disappear, Gustavo stated, not only do they die, but so does the culture and heritage of the Mayan people. Gustavo and other community leaders are currently proposing the use of more organic cultivation methods and the ban of toxic chemical fertilizers.

The students were moved by Gustavo’s words. Woldenberg said she was particularly inspired by his dedication to the environment and community. “I believe that it’s important to take care of the environment and to reduce our carbon footprint,” she said. She has committed to continue to spread awareness about the bee crisis, along with taking other steps to reduce her carbon footprint, such as “signing petitions, being vegetarian, using a reusable water bottle, and riding a bike.”

At the end of the meeting, Gustavo left the students with some words of advice on how to be fair community activists. He said to learn how to speak up and be brave. Even when one is fighting against something much larger than himself, whether that be the government or a big corporation, he should always stand up for what he believes. “Gustavo’s words left a lasting impact on me,” said Woldenberg, “I can make a difference for the causes I believe in even if I am just one person.”