Are School Publications Getting Read? 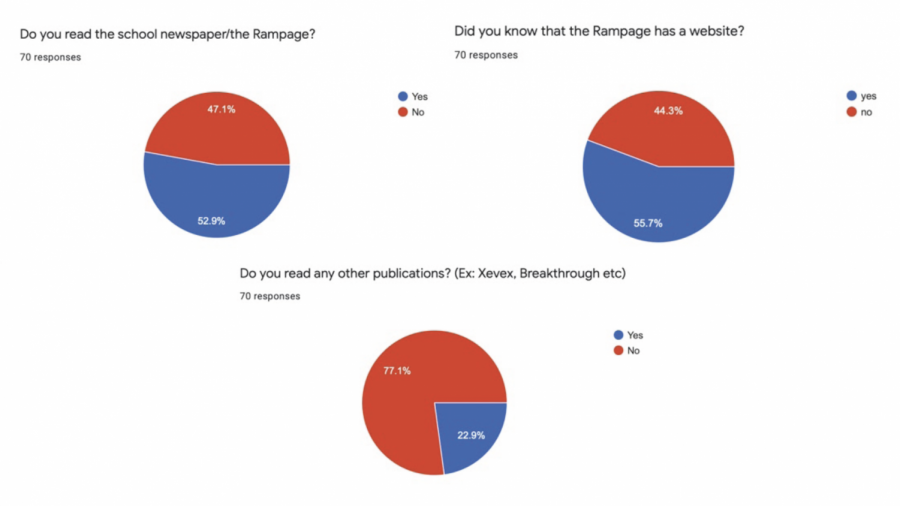 The school newspaper is the eyes and ears of the school. One has to wonder if people actually read it. ” I mean, I read the paper,” said Adrian Rosenfeld ’24, “I see it by the desk sometimes and pick it up while walking out.” Adrian seems to be a rarity. In light of computers and phones, Covid-19 restrictions, and the ever-declining print publication rate, those wound-up newspaper copies appear to be a transport to another time. When someone walks into Ramaz, one of the first things they see is an endless assortment of publications. Xevex, Parallax, Breakthrough, these magazines, and journals are what Ramaz prides itself on and are always broadcast to prospective parents and the expansive Ramaz community.

According to a recent poll taken, only 53 percent of Ramaz Upper School Students read the Rampage. This number is even more concerning when discussing the other publications, with a staggering 23 percent of students claiming to read them. Now, it can be understood why kids may not be enthusiastic about Xevex, the math magazine, or Breakthrough, the science journal. “Xevex is the type of paper that when kids hear about it they either love or hate the idea. There is no gray area. It’s for students who like math. The same can be said for the science journal,” said Akiva Shlomovich ’21, the Editor in Chief of Xevex, “It’s one of those opportunities that are for a specific group of kids, who have a passion for a highly specific topic. When you pick up a copy of the magazine you know what you are getting yourself into.” When asked about the size and demographics of the math magazine’s readership, Shlomovich explained that the type of people who write for the paper and those who read it are practically the same people. ” The words “math” and “magazine” together in a sentence tend to frighten people. We don’t really have the largest readership base. It’s mainly Super honors to honors-level kids who have a passion for the subject.”

Many of the smaller publications cater to an extremely small demographic, which causes low readership. These papers, such as Breakthrough and Parallax, are published seasonally or yearly. ” It makes sense that they don’t come out as often as The Rampage,” said David Gitelman ’22 a writer for Parallax, “It’s not the type of publication that breaks news, or informs people of anything. It’s an interesting paper. We aren’t really like The Rampage. I think they have about forty writers; there are about twenty people on Parallax.” There seems also to be a correlation between the number of writers and the number of people who actually read the papers. ” I mean, the largest group of people who read the paper are the ones who write for it,” says Dr. Milowitz, the faculty advisor for The Rampage, “They like to see their name in print. Also, kids who are interviewed. People commonly referenced also take the time out of their day to pick it up. According to Dr. Milowitz, half the papers put out are usually gone by the end of the month. He said, “Now, we don’t know if people are just skimming them, reading them through, or bringing them home. But they are taken.” In the olden days, pre-covid era, scattered and ripped out pages of The Rampage could be found throughout school, showing how kids would read the paper during breaks and other free times. “It’s truly a testament to how much they were read,” said Shlomovich. Covid has presented unique challenges for the Rampage on how it is distributed. Many students say that they wish the paper was posted on Schoology or someone was actually handing them out. As of this point, the paper sits at the security desk, practically begging itself to be picked up. One of the ways Rampage has tried to tackle this issue is by giving the paper a more virtual presence, with the development of a website and an Instagram account. It seems that only 56 percent of students were aware that such a site exists. The paper needs to do a better job of broadcasting the website and making kids aware that besides the physical paper, there are other variations of the Rampage.

Besides the benefit of standalone issues and the knowledge acquired by those who read it, there are many pros to having student-led publications. “It gives kids a chance to work on their writing skills,” said Samantha Sinensky 21′, the Editor-in-Chief of The Rampage and Breakthrough said, “It helps those interested in journalism get a chance to try it for themselves.” Additionally, especially in the case of Xevex and Breakthrough, writers gain deeper insight into topics they are passionate about. The most obvious plus in all of these works is college admissions.

“Well that’s a factor,” said Samantha, “But if you are only doing it for college it shows up in your writing. Those who really care take time and effort into what they submit, so it’s fairly obvious. They produce better work. ” Students, hopefully, care about their futures, and saying you write for the school newspaper or papers is a great plus. But it should not be the only reason for writing.

Papers, especially school newspapers, are important. “A school needs to have a paper,” said Dr. Milowitz, “It’s essential to give voice to the students in the school.” But some school publications serve different purposes. For example, take the Hebrew newspaper, Toses, which recently came out with its first issue of the year. ” It’s not the type of paper that students pick up and read,” said Mr. Adelman, the Hebrew teacher who’s in charge of it, “I ask kids to write. I also use it in my classes to teach students about Israeli news and culture.”