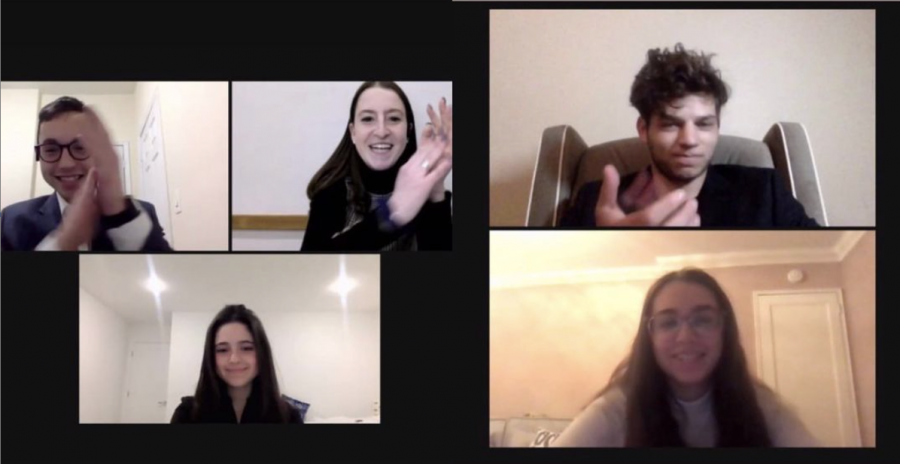 Ramaz offers a plethora of academic, competitive, politics and law based clubs and teams, including Debate, Mock Trial, Model Congress, Model UN, and Moot Court. Each club is different from the other, but they all require the team members to be strong public speakers and have proficient debating skills. After interviewing a member of each club, we received a personal outlook on members’ motives for joining the clubs, how the clubs function, and some of this year’s victories.

Eliza Binstock ‘23 joined the Debate Team this year because “being able to debate any topic is an important skill for anyone to have. These skills teach students how to research a certain topic, gather supporting arguments, and perform well in a debate.” During the Debate meetings “we review how to cross-examine our opponents, and create specific strategies to use during a debate, such as quick thinking and being able to anticipate what our opponents might argue.” Before competitions, she practices by “rereading speeches, preparing possible cross examination questions, and researching evidence to support arguments and contradict opponents arguments.” Binstock participated in a two round debate this year where she had to argue both for and against Donald Trump’s possible incitement of insurrection, and whether or not he deserved conviction. “My partner, Ariella Goloborodsky, and I won our second round, where we held the negative position.”

Ilana Kahn’23 joined the Mock Trial team this year because of her love for debating and interest in “our country’s laws and democratic society. My sister is currently applying to law school, giving me a further understanding of what the judicial system does.” She was first excited after attending the club’s information session because the club realistically simulated actual court. “At the start of the season the team met every Tuesday for an hour to discuss the general rules of Mock Trial, and practiced previous Mock Trial cases as well as New York State’s official Mock Trial case. We were each assigned a role as either plaintiff lawyer, plaintiff witness, etc.” Kahn said that later in the season when preparing for competitions, writing and editing drafts, practicing examinations, and using possible objections and responses, the team practiced for three hours on Tuesdays, Thursdays, and Sundays. This year the team had three competitions.  “We won the first and second but lost on the third. We were creative in our questions which made us stand out from the other teams.”

Rebecca Kalimi ‘23 joined the Model Congress team because she values debating and politics. During the meetings, the chair of the debate “will send us a bill which we have seven minutes to research and we debate affirming or negating the bill by delivering a series of speeches and rebuttal questions.” In order to prepare for competitions, the team composes their own bills with the help of the team captains. “The meets have gone over Shabbat, so we haven’t had the chance to participate for the full time, although, we are definitely eager to.”

Ilan Putterman ‘23 joined the Model UN team his freshman year of highschool. Prior to trying out for the team he participated in a summer Model UN program. He says that the team enables students to feel like a UN delegate. During the team’s meetings they “review the procedures for Model UN conferences and run through mock conferences.” This year the team competed in the Yeshiva University National Model United Nations Conference. “Samara Blatt won Best Delegate and Nicole Hirschkorn received an Honorable Mention in their respective committees.”

The newly found Moot Court team closely simulates proceedings in appellate courts such as the U.S. Supreme Court. Joining Moot Court helps students pursue their passion for law and debate as many law schools hold Moot Court as a co-curricular activity. The club meets every Thursday for an hour and practices by holding Mini-Moots. Students act as either petitioners, the party bringing the appeal, respondents, the party responding to the appeal, or even as a Justice alongside Dr. Herzog and her sister, Attorney Michelle Herzog. Students are given 15 minutes to study the case in teams, conduct research, and prepare oral arguments. Petitioners are required to make their speeches first, followed by respondents, which are followed by questioning and rebuttals from each side. At the end of this year we hope to hold a large intramural Moot Court in which multiple teachers will act as justices. We are looking forward to next year’s competitions in the Yeshiva League.