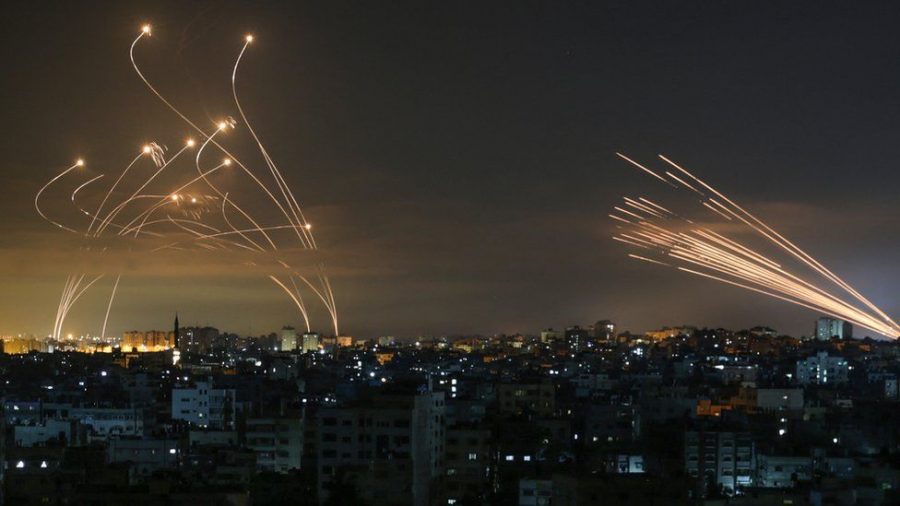 On September 23, 2021 the House of Representatives passed H.R 5323, a piece of legislation that would provide $1 billion in funding for Israel’s Iron Dome defense system. The Iron Dome is a high-tech missile defense system which intercepts the thousands of rockets which the Hamas terrorist group sporadically attempts to launch across the Israeli border from Gaza. The bill had massive bipartisan support and was passed by a wide margin of 420 to 9. However, some House progressives were not so pleased with the bill. Rep. Rashida Tlaib (D-MI) argued passionately on the House floor against giving the funding to Israel. Rep. Alexandria Occasio-Cortez (D-NY), who voted ‘present’ on the bill was spotted crying on the House floor after the vote had passed. Occasio-Cortez has previously labelled Israel an “apartheid state” and has recently called for an end to the “occupation of Palestine.” Rep. Ilhan Omar (D-MN) accused Israel of “terrrorism” and in a tweet for which she was formally condemned by the House of Representatives, she once said that “Israel has hypnotized the world. May Allah awaken the people and let them see the evil doings of Israel.” Tlaib also has a long history of espousing anti-zionist views and uttering anti-semitic dogwhistles. In her speech opposing Iron Dome funding, she accused Israel of operating under a “violent apartheid system” committing “war crimes, human rights abuses, and violence” and of  “promoting racism and dehumanization.” Recently, during a speech in October, she claimed that certain people “behind the curtains” are “making money” by oppressing people “from Gaza to Detroit.” The accusation, which alluded to various anti-semitic tropes, would have felt more in place coming from the mouth of the Ayatollah or a Neo-Nazi than a sitting member of the House of Representatives. Media coverage of this outrageous incident was virtually non-existent. However, Tlaib did draw the ire of fellow Democrat party member Rep. Ted Deutsch (D-FL) upon her refusal to vote for the Iron Dome funding. “I cannot allow one of my colleagues to stand on the floor of the House of Representatives and label the Jewish democratic state of Israel an apartheid state,” said Deutsch. “If you believe in human rights, if you believe in saving lives, Israeli lives, and Palestinian lives… then vote for the funding.” Deutch condemned Tlaib, saying she had “besmirched our ally” and “falsely characterized the state of Israel.” “When there’s no place on the map for one Jewish state, that’s antisemitism,” he concluded.

Both the mainstream Democrat and Republican parties were widely supportive of this bill. Consequently, Tlaib and other House progressives were handily outvoted by their colleagues in spite of their attempts to hold up funding for the Iron Dome. But why did they want to hold it up in the first place? Perhaps progressives in the House did not want to fund the offensive capabilities of the imperialistic Israeli army against the poor, downtrodden Palestinian people. I view this argument as misguided, but at the very least understandable. Yet the Iron Dome literally cannot be used to harm Palestinians since it’s only practical function is shooting incoming missiles out of the sky to protect Israeli civilians. It is as inoffensive a device as possible. The only outcome that could possibly come from defunding the Iron Dome would be the deaths of Israeli citizens who wouldn’t be able to protect themselves. Perhaps then, the progressives believe in a libertarian-style attitude towards reducing all foreign aid in general? This does not seem to be the case, as these same progressive members of Congress have also often advocated extensively on behalf of large foreign aid packages going to the Palestinian Authority and all manner of other foreign governments in the past. Their fixation on decreasing foreign aid seems to begin and end with Israel.

Perhaps Tlaib and her friends in congress have been too blinded by their hatred of Israel to realize that this funding towards the Iron Dome would most likely save Palestinian lives. Rocket attacks by Hamas are aimed indiscriminately towards random civilian centers in Israel, and many Israeli citizens are Arabs. Jews would certainly not be the only victims of defunding the Iron Dome. Secondly, if it were not for the Iron Dome, Israel would have to be a lot less meticulous in their attempts at minimizing Gazan casualties while destroying Hamas military targets. Unlike Hamas, which shoots rockets into civilian areas in the hopes of slaughtering innocents, Israel does not target civilians. Just the opposite, Israel sends knock-bombs and leaflets to warn Palestinian civilians to leave targets which they will soon destroy. Hamas is known for hiding their command posts, weapons caches, rocketpads, and even their military headquarters in schools, hospitals, and other Gazan civilian areas. This is a deliberate strategy which results in unfortunate non-combatant casualties within Gaza and are then used by Hamas to garner international sympathy. Meanwhile, Israel does not suffer as many non-combatant casualties thanks to the Iron Dome. This clever tactic makes Israel appear as the callous aggressor since civilian deaths in Gaza are higher. This is ironic, since Israel takes special care not to harm Gazan civilians whereas Hamas specifically targets Israeli civilians. Israel does not wish for Gazan deaths. From a purely strategic standpoint, Israel is put under intense international scrutiny during its conflicts with Palestine and every single civilian death within Gaza, no matter how unavoidable, is held up as an example of Israeli brutality and Palestinian genocide. If Israel did not have the Iron Dome, they would not have the security to engage in careful actions meant to minimize non-combatant casualties. Israel would be forced to retaliate much more brutally to eliminate the threat of rockets being fired indiscriminately into its vulnerable interior. The Israeli military would be forced to destroy Hamas installations more quickly and ruthlessly, without giving any prior warnings, and with much less caution. This would obviously lead to the deaths of more Palestinians.

Why some congressmen would oppose defending the lives of (overwhelmingly Jewish) innocent civilians against the predations of evil anti-semitic terrorists is beyond me. Not only that, it would save lives in a way that would not even advance Israeli offensive capabilities. Furthermore, it is a solution that would not cost Hamas a single casualty and would also inadvertently save the lives of the innocent Palestinians whom these congressmen claim to champion. I choose in this case to apply the old adage of Hanlon’s Razor: “never attribute to malice that which is adequately explained by stupidity.” I do not think progressive congressmen understand the full ramifications of defunding the Iron Dome. I do not believe they are in favor of the wholesale slaughter of innocent Jews; I just think they are misinformed idealogues. They most likely view the issue of funding the Iron Dome as a binary conflict between poor, oppressed Palestine innocents in their struggle against the evil, imperialistic zionist war machine. I hope they will come to realize that H.R 5325 had absolutely nothing to do with any of those things.