The New Yellow Star: Can Anti-Vaxxers be Compared to Jews during the Holocaust? 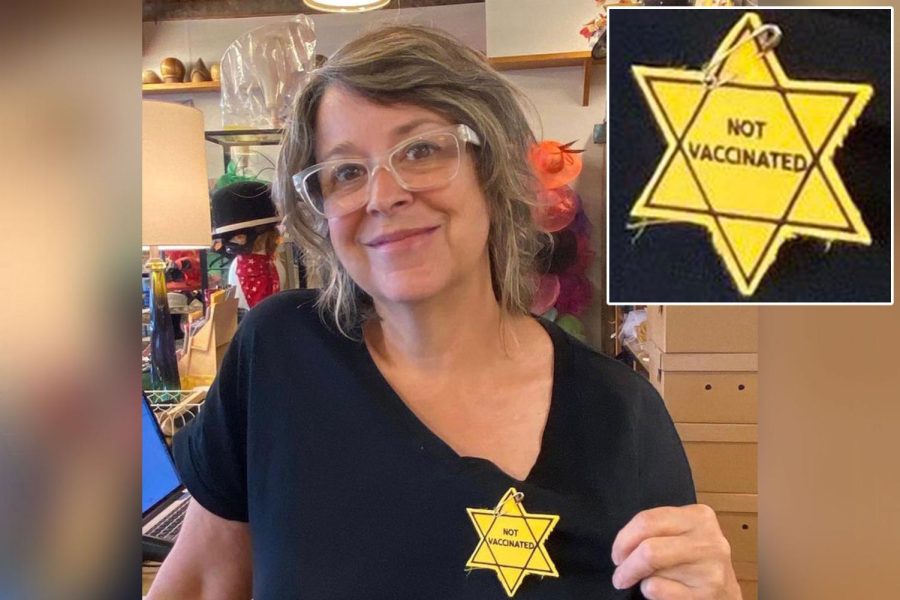 In the past few months, a movement emerged among those opposed to mask and vaccine mandates that promotes wearing yellow Stars of David with words such as “unvaccinated” or “no vax” written in the center. This trend is incredibly offensive to Jews and must be condemned.

It began in May when Food City, a southern supermarket chain, announced that vaccinated workers did not have to wear masks in the store, and that a logo on their nametag would indicate that they had been vaccinated. On May 25, Republican Congresswoman Marjorie Taylor Greene compared the logo to the yellow stars worn by Jews during the Holocaust. Shortly after, a millinery in Nashville, Tennessee by the name of hatWRKS began to sell gold stars inscribed with the words “not vaccinated”. Unfortunately, this shop was not the only one inspired by Greene’s sentiment: in July, the Oklahoma Republican Party posted a yellow star with the word “unvaccinated” in the center as a symbol of opposition to vaccine mandates. Similarly, before an assembly meeting in Anchorage, Alaska regarding a mask mandate this September, a woman cut out yellow stars and offered them to others in attendance. The comparison of the “struggles” of unvaccinated people to the Holocaust was even visible abroad: Bishop Athanasius Schneider from Kazakhstan, claimed that it was justifiable to falsify Covid vaccine cards amidst what he perceives as unethical decrees, because “We know that Pope Pius XII and the bishops, when the Jews were persecuted by the Nazis, permitted the use of fake documents to protect the Jews. It was allowed because the laws against the Jews were intrinsically immoral.”

Yet, this false equivalence is beyond inaccurate. There is no similarity between the Holocaust and coronavirus-related rules. Ethnic cleansing and the genocide of millions of innocent people, tainted with tragedy and discrimination, cannot be likened to an effort to protect Americans and put an end to the pandemic. In fact, they are antithetical to one another – the Holocaust resulted in immeasurable death, while vaccines and masks save lives. Additionally, being banned from a restaurant is not the equivalent of being sent to a concentration camp. There is no comparison between being encouraged to do something and being coerced out of discrimination. While today’s yellow stars purport the implication of being a victim, Covid restrictions are not nearly on the same level as being tortured and killed for identifying with a particular religion. Moreover, supporting mask-wearing in a public setting and promoting vaccines are entirely different from the context in which Jews wore yellow stars. During the Holocaust, Jews were forced to wear them for identification purposes – to single them out as an alienated and despised group of people. Today, they are being used not only to protest against something that saves lives, but also to depict the supposed “persecution” of those who choose to remain unvaccinated or not wear masks.

The analogy is not only a fallacy, but is detrimental to the Jewish people, as it belittles the cause and events of the Holocaust. Furthermore, it uses the trauma and suffering of Jews to bolster a social and political agenda. While those opposed to masks and vaccines have the right to voice their opinions, they can do so without using a symbol that minimizes genocide.