An Interview With Jeremy Propp ‘24: The Mr. Deutsch Quoter 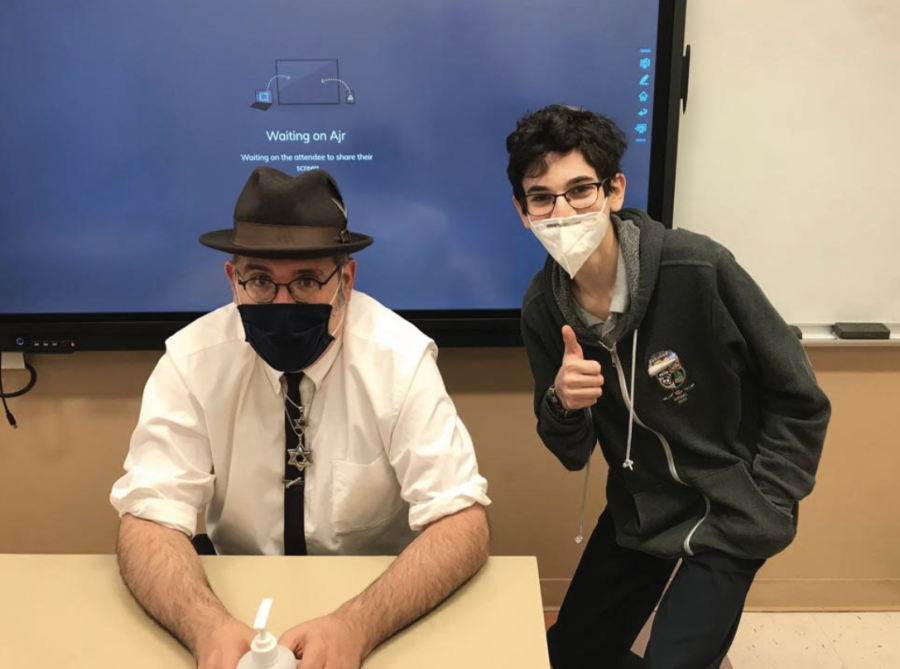 Mr. Deutsch and Jeremy Propp '24 posing together in room 501.

Students at our school are interested in many different topics and sports, be it ping-pong, spike-ball, or more traditional extracurriculars such as basketball and Model Congress. Jeremy Propp is one such student, who you may know from his master Parsha Puzzle Skills and epic rivalry with Jack Cohen. Propp, who felt that his heroic action earned him a special spot in the paper, has collected over one hundred Mr. Deutsch quotes in the past year and a half and has expanded his super-quoting skills beyond the bounds of the classroom. I sat down with Jeremy to understand his logic and gain a deeper appreciation for the work he does preserving Mr. Deutsch’s humor for the history books.

Sarah Silverman: So you and Mr. Deutsch, how did it start?

Jeremy Propp: I remember it fondly, it was the beginning of the year, and we had class in the Auditorium. In his classic Fez outfit, he walks in and starts asking us if we knew how to read. And I thought to myself, “Huh, what an interesting teacher.” And one kid, who would arrive late to class every day, setting a new Mr. Deutsch record, was a little hesitant in his response. And Mr. Deutsch joyfully said, “Ah, I wish it were true, I want to do a teaching how to read montage, with images of us playing catch as if you were my son, and reading Dr. Suess, oh the fun we could have and the places we could go!” I knew at that moment that it was going to be a great year.

SS: When did you start writing down his quotes? What was the reasoning behind that?

JP: During class, I would be laughing like crazy and felt that these jokes needed to be shared with others. What about the poor children who did not get the experience of having him? Would they be deprived of his humor and cutting remarks? This was something that I couldn’t stand. So I created a Google Doc where I would write down anything funny that he said. And as it turns out, Mr. Deutsch says a lot of funny stuff, and the list has grown quite long.

SS: Did Mr. Deutsch appreciate you transcribing his words? Was there any hesitation?

JP: I think he was a little confused in the beginning, but over time it was a shared joke between us. Honestly, I hope it was a shared joke, or I could have been misinterpreting his expressions,… well, I guess it’s too late to think about that. Anytime he would say something funny, I would say, “I’m writing that down,” and he would respond that as long as the good people of Ramaz were ok with it, so was he. The quotes have even worked in my favor. My history essay was a little short on the final, so I wrote “Sorry to interrupt the regularly scheduled programming…” for one full page of it and jotted down my favorite Mr. Deutsch quotes. I ended up doing well on the exam, so he must have at least found it funny.

SS: Now I understand that you do not have him this year; how has that been for you? Have you started quoting other teachers?

JP: I’m not going to lie when I say it has been difficult, but the fact that my teachers this year are all amazing has really helped me deal with this pain. Additionally, I make time to see him when I can. I noticed he has a sophomore history class while I have Spanish on the same floor and will pop my head in before or after class to say hello and take down some quotes. The amount of funny things he can say in two minutes is astonishing. Unfortunately, I have been too busy to add them to my formal Google Doc list, but they are scattered around my notebooks and papers. When other teachers say funny things, I write them down too, but none have been at the joke per minute ratio than Mr. Deutsch has achieved. One of my friends has him this year, but sadly she is reluctant to carry on the legacy.

SS: Are there any particular quotes you want to share with readers? Any words of wisdom you have gained from your project?

JP: Getting a quote from someone is an interesting experience. When a person says something, it makes sense in context, but looking at it later, you start scratching your head and wondering what it was all about. A perfect example being “If there’s a monkey-on-monkey fight club downtown on Doyers Street, trust me when I tell you that it’s open at 8:30 in the morning.” Now, do I remember what this was actually referring to? No, but it is funny that one-time last year, Mr. Deutsch taught something in history that was somehow related to it. Maybe the quotes we write down say more about us than about the stories and people we’re quoting. My other favorites include “God, will we get extra credit if we kill all the enemies of Christ?” and “You are students of Ramaz. I think you will all be good merchants.” Some classes students like because the course is a joke/we don’t get any real work done and others because the teacher is super passionate about their subject. I think Mr. Deutsch has mastered combining both of these types of lessons, and I’m looking forward to getting more quotes in the future.

When asked for a comment, Mr. Deutsch was deeply honored that he received his own PR interview but utterly baffled at how slow school news must be for it to be included. And, with respect to Jeremy, he decided not to provide a quote for this article. However, he supports Propp’s efforts and feels that any trivial jokes to get him through his Smartboard slides in class are much appreciated. As long as it does not interfere with his job, of course, and more importantly, his hat collection.